So last night I posted a pre-read to give you time to chew on Genesis 22:1-19.  It begins with “Some time later God tested Abraham”  What is he testing him for now?  He was told to leave his county, his people, his father’s household, save Lot from a large army, tithe, circumcise himself, wait 30 years for your wife to get pregnant…what else can Abraham be tested on?  Let’s get our geography…

Then Solomon began to build the temple of the Lord in Jerusalem on Mount Moriah, where the Lord had appeared to his father David. – 2 Chron,3:1

So we are on the land that will be later called Jerusalem.  Where Jesus, God’s son, his only son, whom he loved,  will come, carry wood on his back….

Obviously,  I can talk about this chapter all week but let me point out verse 5:

“Stay here with the donkey while I and the boy go over there. We will worship and then we will come back to you.”– Genesis 22:4

17 By faith Abraham, when God tested him, offered Isaac as a sacrifice. He who had embraced the promises was about to sacrifice his one and only son, 18 even though God had said to him, “It is through Isaac that your offspring will be reckoned.”19 Abraham reasoned that God could even raise the dead, and so in a manner of speaking he did receive Isaac back from death.-Hebrews 11:17-19

back to Genesis.  Why was he Abraham stopped??

12 “Do not lay a hand on the boy,” he said. “Do not do anything to him. Now I know that you fear God, because you have not withheld from me your son, your only son.”

Abraham had faith from the moment he was told to “Go” or “Leave”.  There were times he trusted and obeyed God.  But did Abraham fully trust God.  If he killed Isaac, then God’s promise wouldn’t happen??  Yes, he fully believed God’s Promise!

He passed the test of believing God’s full measure in the promise that He conquers death.  “Now I know that you fear God”  Abraham believed God’s Promise!!  He was told he would be a father of nations.  Abraham believed.  The Gospel is actually that easy.  Do you put all your faith in the Creator of the universe that when he says “I PROMISE, you will be raised from the dead.  I will PROVIDE a SUBSTITUTE!  God will provide the Lamb (I grew up going to catholic mass: “the lamb that takes away our sins”….I had no idea what that meant).  Do you hope that’s going to happen or do you BELIEVE that is going to happen?  Do you believe his Promise in Salvation that God will provide Jesus as your substitute on the Cross??

17 I will surely bless you and make your descendants as numerous as the stars in the sky and as the sand on the seashore. Your descendants will take possession of the cities of their enemies, 18 and through your offspring  all nations on earth will be blessed,[c] because you have obeyed me.”

Abraham believed that even if he followed through, God was still God, and would have fulfilled his promise.  So you can move on, I am going to write some more in Comments on the blog.

Nahor’s sons:  Printable is in the handout section.  If you can’t find it let me know.  BTW, how come no one names their son Uz or Buz anymore?? 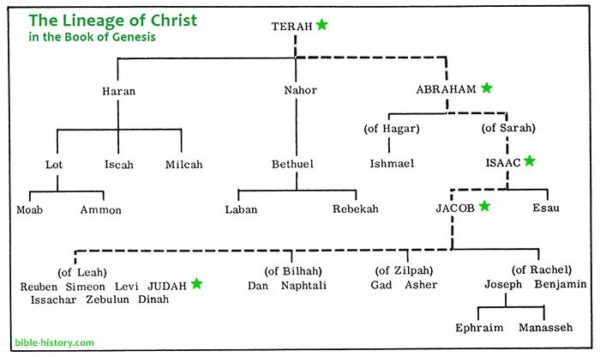 Chapter 23  The death of Sarah.

Why is Abraham wanting to buy this burial site so badly that when the price of the land was offered to him at double the price he doesn’t even negotiate, he just buys it?  Abraham is a foreigner of this land, but he knows that God’s promise will be fulfilled and his descendants WILL be given this land so he wants to secure the cave of Machpelah as a burial site so that when they are given the land,  Sarah’s burial will be there.    Abraham will also be buried there as well as Isaac and Jacob later.

So Eliezar prays “can you make this easy on me and give me a unmistakable sign so that I know she is the one”.  (If only this happened on the show The Bachelor!) Just kidding, Eliezar knows the importance of the task so goes to the Lord in prayer.   Before he is done praying….She’s The ONE!  Not only is she the one but she is kind, a virgin, and beautiful!  Jackpot!  Look at your family tree above…Bethuel was her father…check #1 off your list.  Bethuel must have passed away because Laban commits her to marriage ONLY after drooling over the $$$.  He noticed the jewlery first…then was told in verse 39 my master is wealthy.  Score!!  So now what about #2 on the checklist.  Could be a problem because Assyrian Law may not protect a woman from WHO they get to marry BUT they do get a say in WHERE they live (well isn’t that nice of you men!)

57 Then they said, “Let’s call the young woman and ask her about it.” 58 So they called Rebekah and asked her, “Will you go with this man?”

And so they were married.  And lived happily ever after!  (If only that were true!!)  Till tomorrow….