Years ago at Church our pastor told a story about a woman who had an old frozen turkey in her freezer.  She called the 800 number on the package and asked the company if the turkey was still safe to eat.  The company said it was safe to eat but probably wouldn’t taste great anymore being freezer burned.  So she donated it to a food bank for less fortunate people (in her heart she was doing something good).    I remember sitting in church crushed when I heard this.  I was the characteristic of the woman.  When a tragedy happens locally and we are asked to help out, I would go through my “gently used” items that I did not wear anymore.  What??  God gave us His son as a sacrifice! and I am giving back to God my ‘goodwill’ pile?  I am not telling you this to beat you up, but I wanted to share how the Holy Spirit uses books like Leviticus to remind me that we are to present our very best in the name of the Lord (in everything we do).

Chapter 23: I already have 1 printable in the handout section but here are 2 more in case you wanted something different. 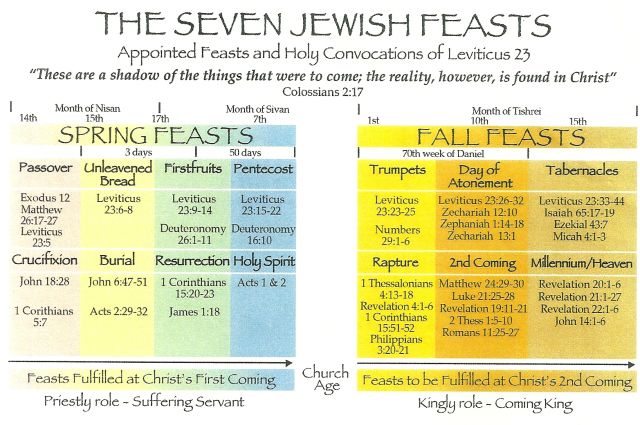 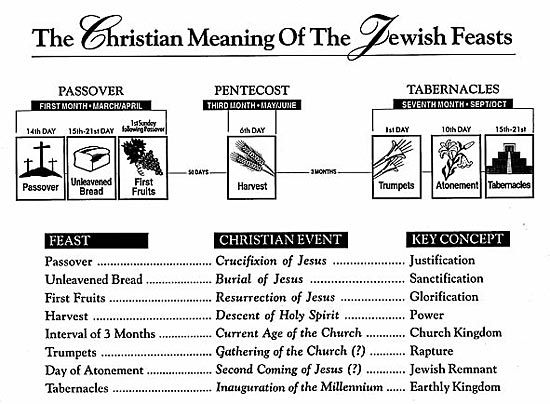 The Israelites observed a lunar year, which contains 354 days. Lunar months have 29 and 30 days alternately, and begin with the appearance of the “new moon.”

Sabbath: a weekly observance (“appointed time”), in contrast to the other “convocations” that occurred only once a year. The Israelites did not assemble around the tabernacle, but observed the day in their own tent.

Passover and Unleavened Bread:  Verse 4 introduces the annual “appointed times”.  The Sabbath could be observed anywhere,  even at home. Three special occasions required attendance at the sanctuary for participation.  Passover: commemorated God’s deliverance of Israel from Egyptian slavery. (Exodus 12)  Jesus died as the Lamb ON Passover Day.  That is AMAZING! Passover was one of the three feasts that all the adult males in Israel had to attend, along with the feasts of Pentecost and Tabernacles.  These three feasts remind us of the death of Christ, the resurrection of Christ, and the return of Christ.

The Festival if Weeks: This festival had several names: “Harvest,” “Weeks”, “First fruits,” and “Pentecost” . Fifty days after Passover, namely: the day after the end of the seventh week. “Pentecost” means “fiftieth” day. This “feast” was a thanksgiving festival, and it lasted one day. The people offered God their “first fruits” of the spring harvest, as a thanks offering for His provision of their physical and spiritual needs.  PLEASE see how awesome God is.  So in this difficult book of Leviticus are some of the coolest gems!!  God put a festival on the calendar that required “public assembly” so many people from all over the world (for first time readers know that after being exiled out of their land God scatters His people…with a purpose) would be required to gather SO THAT 50 days after the Passover people from many countries would be gathered to witness the pouring out of the Holy Spirit and then return to their homes and spread the Good News!!

Before we go any further…are you seeing the 7’s.   This whole book was filled with them, even the various laws were grouped by 7 or 7×2 or 7×3.. BUT this one is too cool not to point out. During the seventh month of Israel’s religious calendar, three “holy convocations” took place. Not only was the seventh day special (v. 3), but so were the seventh week (vv. 15-22), the seventh month, the seventh year (25:1-7), and the forty-ninth (seven times seven) year (25:8-55).

The festival of Trumpets: The Feast of Trumpets began on the first day (at the new moon) of the seventh month. It is also called Rosh Hashanah, which means “Head of the Year,” because it marks the beginning of the Jewish civil calendar. During this celebration, no kind of work was to be performed, but burnt offerings and a sin offering were to be brought before the Lord.   The blowing of the trumpets on first day of the month heralded a solemn time of preparation for the Day of Atonement; this preparation time was called “Ten Days of Repentance” or the “Days of Awe.”

Day of Atonement.  We covered this, but if you are jumping in go back to Ch 16.  But take a look at the charts and see how this is will be fulfilled. This day will be the Second Coming of Christ.

The Festival of Tabernacles: During this convocation, the Israelites’ looked backward to the land of their slavery, and forward to the Promised Land of blessing. Its other names were the “Feast of Booths” and the “Feast of Ingathering”.   The Jewish people call it Sukkot. The people built booths out of branches, and lived under these for the duration of this eight-day festival, as a reminder of their life in the wilderness.  It was the only festival in which God commanded the Israelites to “rejoice,” and it revolved around the harvest of grapes and other agriculture. God designed this feast primarily as a time of anticipation, not just reflection. Similarly, our worship as Christians should include the element of anticipation, as we look forward to entering into all of what God has promised us in the future.  (Look at your chart)

Leviticus does not mention the “Feast of Purim”, that the Jewish people added to their calendar later (Esther) and the  “Feast of Dedication” (Hanukkah).  I cannot wait to talk about those!