I think we can all relate to Gideon.  He needs a “sign”….many signs when called to do something we feel is impossible. But more space is devoted to Gideon in the Book of Judges (100 verses) than to any other judge, and Gideon is the only judge whose personal struggles with his faith are recorded.

The Midianites were nomads that descended from the line of Abraham.  At this point, all the enemies are confusing me, so take a moment to remember some of these…

So again we fight the Midianites. It was not their strategy to kill the Israelites and take over their land. They preferred to let the Israelites sow and harvest their crops, and then steal what God’s people had labored so hard to produce!  To hide their harvested crops and other valuable possessions, the Israelites hid them in caves and clefts of mountains.  When we meet Gideon he is threshing wheat in a cave.  Let me show you how oppressed the Israelites were:

Normally, harvester would pick up a load of wheat and toss it into the wind in order for the lighter chaff, which was useless, to be blown away.  The chaff would then be swept up and burned, while the good grain settled into a pile. This process was winnowing the wheat.  The fact that Gideon had to do this in a winepress (lowland, no wind) so that the Midianites would steal it,  made threshing nearly impossible.

In calling Gideon to deliver the Israelites, God revealed Himself twice. The first time, God appeared to Gideon and spoke directly to him through the “Angel of the LORD”.  The second time, God commanded Gideon to destroy the local Baal worship, and renew the worship of The Lord. In the first case, God acknowledged Gideon, and in the second, He called on Gideon to Him.

Gideon could not understand why the Israelites were suffering as they were, “if” the Lord was “with” His people (“if the LORD is with us, why then has all this happened to us? a very common phrase still today). He failed to realize that their condition was the result of their abandoning God, not His abandoning them.

This act of tearing down the family’s pagan altar was a public confession of Gideon’s commitment to the Lord. It was necessary for him to take this stand personally before the nation would follow him as its judge. This sacrifice served a twofold purpose: First, burnt offerings of worship made atonement and symbolized the offerer’s total dedication to the Lord. Secondly, Gideon’s sacrifice was a rejection of Baal worship, since the “bull” was the sacred animal in the Baal fertility cult.

The Israelite soldiers numbered only 32,000 while the Midianites numbered 135,000 warriors. God clearly revealed His purpose in reducing Israel’s army to ONLY 300 men. He wanted everyone to recognize that the victory was His work rather than Israel’s 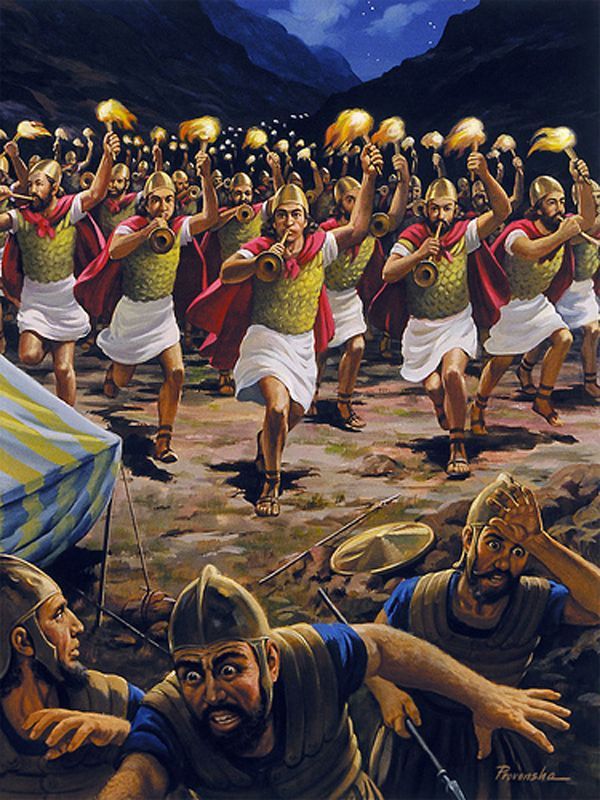 If the men were instructed to carry a horn in one hand and a lantern in the other, how could they use a weapon?  Oh, yeah, God was the ONLY weapon they needed.