Just like when we read Matthew, Mark, Luke, and John, we read the same time period from different perspectives intended for different audiences.  That is how we will be reading for a little while.  Many of you will prefer 2 Samuel, others will prefer the Chronicles.  What is important is not what is the same but looking for what is different.  The Chronicler is going to depict David’s victories and the support from the nation in stark contrast to the struggles David has through  1 Sam, 2 Sam, and the Psalms.

This is the 3rd anointing of David.  The first one was a private ceremony with Samuel (1 Samuel 16:13), then he was anointed king of Judah (2 Sam. 2:4), finally, David was so patient to wait on God’s timing to King him over All of Israel.

JERUSALEM- What a huge moment. A few reads ago we were talking about Mt. Zion (Jerusalem), in the Psalms and I showed you this: 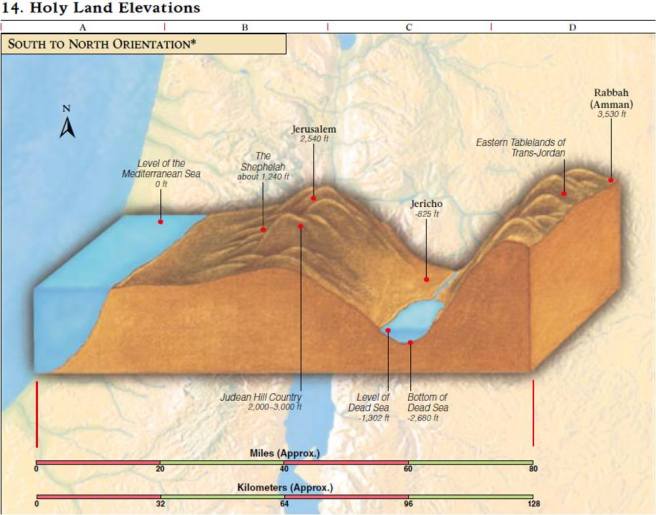 Mt. Zion is 2,540 feet above sea level, and to make it even harder to conquer is it sits on top of a Valley 1,300 below sea level.  When David marched out to conquer it, the Jebusites laughed!  Even the lame and blind would be able to fight off an army trying to take this city.  Well, David had a secret weapon….The Lord! David used the water shaft to gain entrance and took over the city called “The City of David”.  I have not been to Israel but I know some of you have and you can still see Warren’s shaft today.  Amazing!

Obviously a more detailed account of what happened.  The focus here is God. Jerusalem is centrally located, about 11 acres, with deep valleys on 3 sides, and possessed an excellent water source.  David takes immediate action to fortify the city as his capital.  David’s capture of Jerusalem was foundational to all the political and religious events that will follow.

David honors the Lord for this defeat by pouring his drink (as a drink offering) to the Lord. Chapter 11 closes with giving credit to the military men who risked their lives to starting with “The Three”. 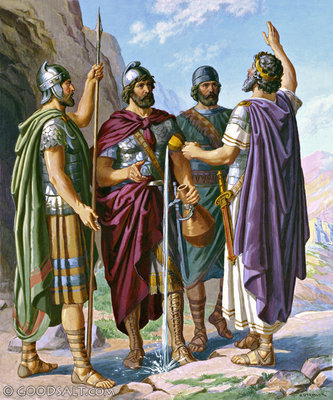 David’s Men (his inner circle), the additional 30 are named as loyal warriors that provide protection for King David.

Chapter 12- The chapter is split in half showing the support David received before and after king Saul going back to the days when David was in Ziklag.  I particularly like the verse that ends the first half:

22 Day after day men came to help David, until he had a great army, like the army of God.

Starting in verse 23 the Chronicler shows the support from ALL the nations for David after the death of Saul.  We end with the entire nation gathered around David celebrating his kingship.

NOT that we need proof of this major historical event, but for those who may struggle with the Bible just being stories,  “not History”, then you would have to ignore discoveries archeologists find that confirm such events.