If you like a good checklist to see what we will pick off our “Honey Do” list: Click here.  Looking at it you will see that we are coming up in Elijah (pretty familiar name) and the book of the Prophets, starting with Obadiah. (completed is the *)

Today we switch to the Northern tribes that Jeroboam led to break off from the line of David.

Nadab-25 Nadab son of Jeroboam became king of Israel in the second year of Asa king of Judah, and he reigned over Israel two years. 26 He did evil in the eyes of the Lord, following the ways of his father and committing the same sin his father had caused Israel to commit. (that pretty much summed it up)]

Baasha-Asa king of Judah, Baasha son of Ahijah became king of all Israel in Tirzah, and he reigned twenty-four years. 34 He did evil in the eyes of the Lord, following the ways of Jeroboam and committing the same sin Jeroboam had caused Israel to commit. (I am seeing a pattern)

Elah- Elah son of Baasha became king of Israel, and he reigned in Tirzah two years……they aroused the anger of the Lord, the God of Israel, by their worthless idols.

Zimri-Zimri reigned in Tirzah SEVEN days. He must have been busy to commit so many sins in just 7 days!  But Omri did evil in the eyes of the Lord and sinned more than all those before him. (Good grief) Finally, we get to Ahab.  I remember the first time I read this book I about fell over when I found out Jezebel was a person in the Bible.  I thought it was just a nickname for a “bad girl”.  Who knew!

“Ahab son of Omri became king of Israel, and he reigned in Samaria over Israel twenty-two years.” (See, now reigned in Samaria makes sense).31 He not only considered it trivial to commit the sins of Jeroboam son of Nebat, but he also married Jezebel daughter of Ethbaal king of the Sidonians, and began to serve Baal and worship him. 32 He set up an altar for Baal in the temple of Baal that he built in Samaria. 33 Ahab also made an Asherah pole and did more to arouse the anger of the Lord, the God of Israel, than did all the kings of Israel before him. 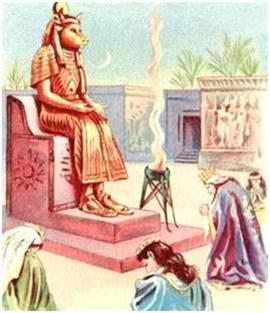 3 The Lord was with Jehoshaphat because he followed the ways of his father David before him. He did not consult the Baals 4 but sought the God of his father and followed his commands rather than the practices of Israel.

9 They taught throughout Judah, taking with them the Book of the Law of the Lord; they went around to all the towns of Judah and taught the people.