Paul is talking to Corinth.  Remember the first thing Paul addresses is the lack of unity in the Church.  We know from this text that the church is not unified as a “body”.  He has also addressed their perception of status and favoritism.  This all ties together. 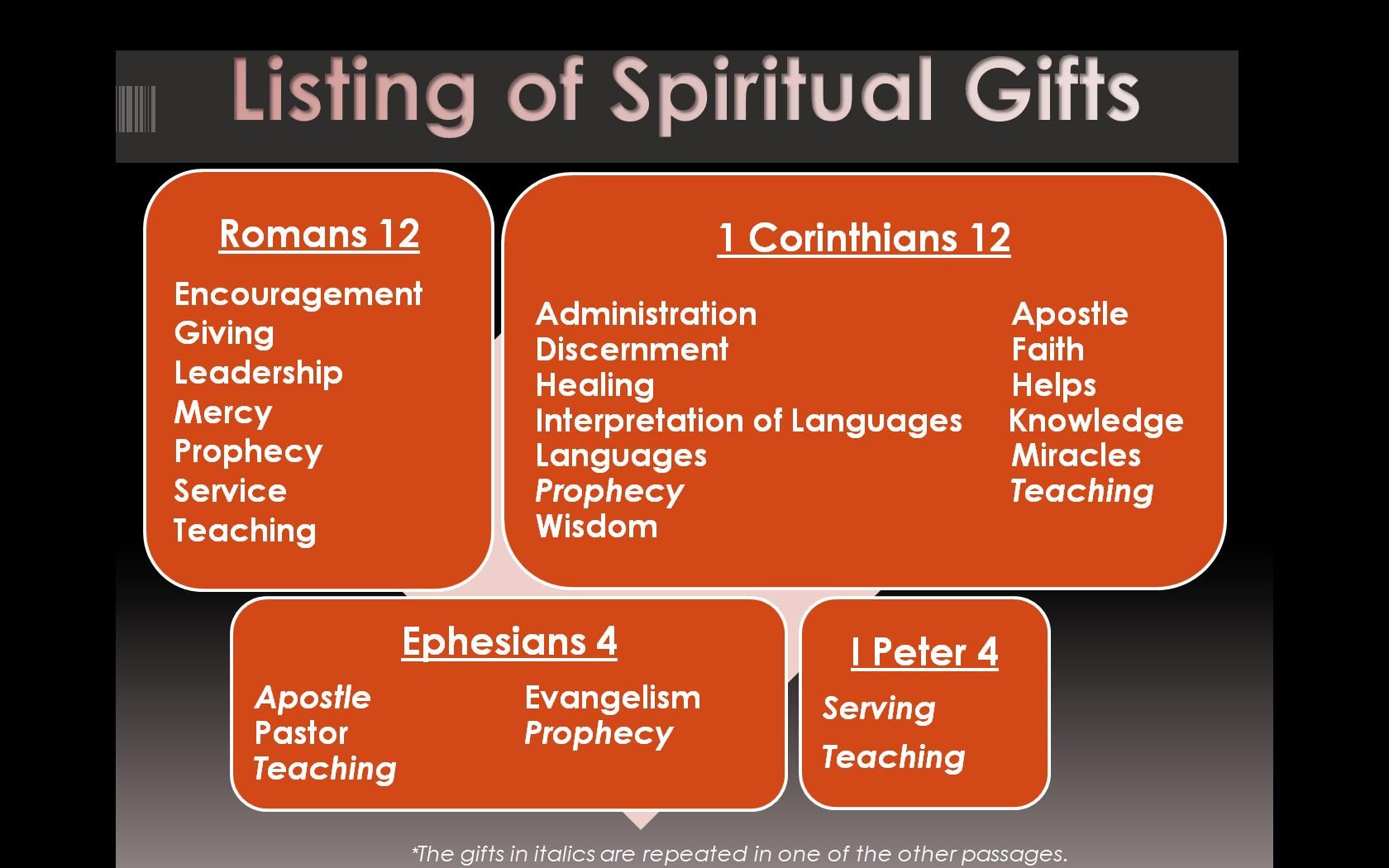 21 The eye cannot say to the hand, “I don’t need you!” And the head cannot say to the feet, “I don’t need you!” 22 On the contrary, those parts of the body that seem to be weaker are indispensable, 23 and the parts that we think are less honorable we treat with special honor. And the parts that are unpresentable are treated with special modesty, 24 while our presentable parts need no special treatment. But God has put the body together, giving greater honor to the parts that lacked it, 25 so that there should be no division in the body, but that its parts should have equal concern for each other. 26 If one part suffers, every part suffers with it; if one part is honored, every part rejoices with it.

Spiritual gifts are GIVEN by the Holy Spirit. If we are genuinely seeking God’s lead through prayer, fellowship, studying God’s Word, and the sharing of the Gospel, our gifts will become obvious.

Take delight in the Lord,
and he will give you the desires of your heart.

Can I also give you something to think about (rare of me not to quote scripture but….)

the word is used 538 times in the Bible.  FIVE HUNDRED AND THIRTY-EIGHT!  How cool would it be the next time you read through the Bible you have a colored pencil and you put a heart around the word each time. ❤️

With spiritual maturity comes Love.  We only have 30 days left and we have read all the words God wrote for us.  You won’t remember my genealogies, my maps, why Simeon did not get land, who were the good kings verse the bad kings, etc.  We walk away with a greater understanding of Who God Is.

James 1:22 Do not merely listen to the word, and so deceive yourselves. Do what it says. (❤️ 538 times) 23 Anyone who listens to the word but does not do what it says is like someone who looks at his face in a mirror 24 and, after looking at himself, goes away and immediately forgets what he looks like. 25 But whoever looks intently into the perfect law (❤️ 538 times) that gives freedom, and continues in it—not forgetting what they have heard, but doing it—they will be blessed in what they do.

1 Corinthians 13:13 And now these three remain: faith, hope and love. But the greatest of these is love.

The Greek word translated tongues literally means “languages.” Therefore, the gift of tongues is speaking in a language a person does not know in order to minister to someone who does speak that language. According to Paul, speaking in tongues is valuable to the one hearing God’s message in his or her own language, but it is useless to everyone else unless it is interpreted/translated. A person with the gift of interpreting tongues (1 Corinthians 12:30) could understand what a tongues-speaker was saying even though he did not know the language that was being spoken. The tongues interpreter would then communicate the message of the tongues speaker to everyone else, so all could understand. “For this reason, anyone who speaks in a tongue should pray that he may interpret what he says”- Good so far?  (hard topic)

IF the gift of speaking in tongues were active in the church today, it would be performed in agreement with Scripture. It would be a real and intelligible language (1 Corinthians 14:10). It would be for the purpose of communicating God’s Word with a person of another language.

God can most definitely give a person the gift of speaking in tongues to enable him or her to communicate with a person who speaks another language. The Holy Spirit is sovereign in the dispersion of the spiritual gifts (1 Corinthians 12:11). Speaking in tongues does not seem to occur today in the manner it did in the New Testament, despite the fact that it would be immensely useful on mission trips!!

This is a long letter (and there is still another letter!).  Why?  Because the church in Corinth was in chaos.  Paul’s letter must be read in context.  God is a God.  His church should be too.  It all needs to work together in harmony as one body.

verse 26 “Everything must be done so that the church may be built up.”

So let’s take a tough one to chew on and read it in context: 34 Women should remain silent in the churches. They are not allowed to speak, but must be in submission, as the law says. 35 If they want to inquire about something, they should ask their own husbands at home; for it is disgraceful for a woman to speak in the church.

The church of Corinth was noted for the chaos in that assembly. It seems that everyone in the church service was participating whenever and however they wanted. Those with the gift of tongues were speaking simultaneously, and no one was concerned with interpreting what was being said. Those with a supposed revelation from God were shouting out randomly and apparently no one was evaluating what was being offered as prophecy. The meetings in Corinth were characterized by chaos. To remedy this, Paul instructs a number of groups to “be quiet” at certain times and under certain conditions:

God is a God of order.